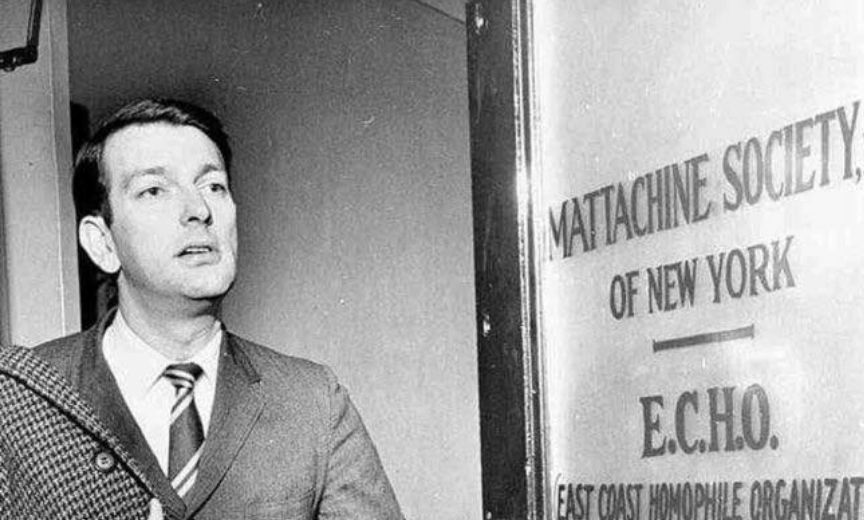 Leitsch was a formidable member of the Mattachine Society and eventual president and executive director for the New York chapter of the organization. He was one of the first and few members to begin using his real name in interviews and voluntarily presenting himself as gay to the press.

In response to the New York law forbidding bartenders to serve alcohol to queer people, Leitsch organized Mattachine’s “Sip-in” in 1966. It almost backfired when the press followed them to two different bars with no results. They went to Julius’ in the Village and Leitsch said to the bartender, “We are homosexuals. We are orderly, we intend to remain orderly, and we are asking for service.” The bartender refused and they sued the bar for one dollar (They weren’t after money, just exposure and a means to challenge the ordinance in court). The court found that gays had the right to peacefully assemble. It wasn’t an indisputable win, but that such an act of gay civil disobedience worked began setting the framework for acts of disobedience to come.

In 1969, Leitsch heard on the radio that an unruly crowd was building outside of a bar in the Village. The bar was Stonewall and Leitsch arrived to the riots and immediately began documenting them. He was the first gay journalist to report on the event, with his account being published in The Advocate and in the Mattachine newsletter.

Julius’, the site of the Sip-in, is still a hugely popular spot today and one of my favorite bars in the city. Multiple pictures of Leitsch hang on the wall. One of them is signed. I first heard of him when researching for my book, and assumed he’d passed away like so many of the figures I’d been reading about, but around the second or third time I went to Julius’, I saw a notecard placed on one of the tables: Reserved for Dick Leitsch.